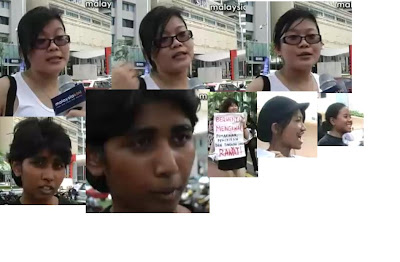 Rajeshvari demands apology from Immigration
IPOH: Young mother M. Rajeshvari, who was recently released from the Lenggeng Immigration depot for illegals in Negri Sem- bilan, wants an apology from the department’s director-general for her wrongful detention.

Perak Health, Environment and Human Resources Committee chairman A. Sivanesan relayed Rajeshvari’s demand during a press conference yesterday as she is not fluent in Bahasa Malaysia.

He said it had been two weeks since Rajeshvari’s release, but department director-general Datuk Mahmud Adam had been “dead silent” on the matter.

“There is no apology, offer of compensation or visit to her Kampar house to explain her wrongful detention,” he told reporters yesterday.

It was reported that Rajeshvari spent 11 agonising months at the depot because she could not recall her MyKad number and was not fluent in Bahasa Malaysia.

The 22-year-old, who was six months pregnant then, was waiting for a relative at a coffeeshop in Brickfields, Kuala Lumpur, when a raiding police party asked to see her MyKad.

She failed to produce her MyKad as she had lost it.

Noting that Rajeshvari planned to sue the department, Sivanesan said the police officer and Immigration Department officer involved in her arrest and subsequent detention should come forward and explain.

Urging the department to check all detention depots in the country, Sivanesan said he feared that Rajeshvari’s case could be just the tip of the iceberg.

Ipoh Barat MP M. Kulasegaran, who was also present, said when Rajeshvari was charged in court, she was not given an interpreter who could converse in Tamil nor was she given any legal representation.

Simple examples:
1. Chinese employers would never promote a Malay to a Managerial level and above even if he is much more qualified and knowledgeabe than the rest of the Chinese employees. BUT, you want Malays to give higher ranks/posts to Chinese in government organizations.

2. You want to be called Malaysian and to be treated the same as Bumis BUT you refuse to practice National Language, like a true Malaysian citizen.

3. You want to be called Malaysian BUT you never want to accept the history of this land - the historical facts of Tanah Melayu, Chinese relationship with Communism or your great ancestors history of migrating to this land.

4. You want UiTM to be opened to Chinese BUT you never want to abolish your racist schools that instill racisme and separate your children from the Bumis and make it harder for us to accept you and vice versa. Deny all you want, but till you can tell the truth, there is no truce.

5. You want to be called a Malaysian BUT you don't really acknowledge our Sultan. In fact, you act as if the Sultan only belongs to the Malays and Chinese has nothing to do with them. I've met a Chinese who doesnt even know what Agong means.

6. Chinese-controlled banks would try hard not the help Malay entreprenuers BUT you want the government to help Chinese entrepreneurs all the same.

The truth is, you don't want to be a Malaysian, you just want to have the country all to you. You don't want to embrace Malaysian culture, national language, perlembagaan and our history - YOU JUST WANT CHINESE TO RULE MALAYSIA AND BE THE PM. That's all you want, isn't it?

Do you really think the Australian would let the Chinese become the head of their country one fine day - in ten or twenty years from now when the Chinese bred all over Australia? Or do you think the American can even imagine a Chinese President? Or British would accept an Indian PM?

Then why Malaysia must be different? Because you thought that Malays are inferior race and you are superior and therefore you should rule us???

You know, Chinese are very chauvinist. I know you know it but you don't care - that's how chauvinist you are.

My australian cousin once expressed her hatred towards the Chinese for thinking of themselves as Australians just because their grandfather migrated there some time ago.

One american movie starred by Edie Murphy once insinuated that Chinese are really racist and hate every other races. It said that Chinese only treat others well when others can give them business.

And for Indians, my English colleague has once expressed his hatred towards indians for behaving as if they belong in Britain more than the English themselves.

Maybe Chinese should learn some manners: You can't go to people's place and not respecting the host and expect the host to accept you as family.

But then, my last word is that: NOT ALL CHINESE ARE LIKE THAT - IN MY OWN CIRCLE OF PEOPLE, THE RATIO IS ABOUT 5 OUT OF 40 CHINESE ARE REALLY CONSIDERATE, TOLERANT AND KIND PERSONS.

Then again, NOT ALL MALAYS ARE PERFECT TOO. Some Malays are really racist. They are mostly those in PAS but somehow for the sake of power (which actually belongs to DAP), they started to sound ridiculously open lately and not racist anymore.

I still remember how I defend the Chinese from PAS some time ago. This is because UMNO Malays used to be the ones that are not racist, untill lately that they started to sound like it.

Why? Because they can't take it anymore with the Hindraff and Majlis Peguam and then, the Chinese not wanting to accept fact as being the immigrant - long time ago and purposely create havoc by jumping up and down for nothing.

There's nothing wrong with the fact, we all do accept that you are a Malaysian now but why can't you accept the Malaysian historical fact that your great ancestors are immigrant to this country? And why must you deny the fact of the social agreement? Why try to change history if you don't have any evil agenda towards the Malays and the country?

This NEP and social agreement things are not worth a fuss. The Chinese are not satisfied with it. But then, the Malays are also not satisfied with a lot of things - especially the economy. We never blame the Chinese though, we accept the facts that Malays are not a good money maker as compared to you. The NEP is not taking anything away from the Chinese, it's just merely trying to create a base for the Malays. If it fails, then what is your problem? It's the Malays problem. It never give you any harm, the proof is that the Malaysian economy still belongs to you. Even you said so. So isn't that not enough? Why so greedy? You want more, you just want everything, right?

You know, Malays are known as very tolerant people, that is why you are where you are today. But then, the Chinese started to assume that tolerant also means stupid and that is why you are trying so hard to take over everything from us. Now, bear this in mind, that MALAYS WOULD OPENLY ACCEPT ANYBODY AS FAMILY AND SHARE EVERYTHING WITH THEM. But please, respect us, our rights, our limits. There is nothing in the world that has no limit accept the power of Allah. So, when people are willing to share their belongings with you, you have to share yours with them too. You have to give and take, didn't your mother teach you that? Or does it only applies to your own kind????

Now, I don't like all these racial discussions. I would love to have equality with all Malaysians - with a condition that they are truly Malaysian by heart, in culture, language, history, education...and everything. Enough said. Now, why don't we just unite and get rid of Dollah Badawi once and for all, and we can continue to live in harmony again. About Dato' Ahmad Ismail - if anybody want him to apologize then show us prove that the Chinese great -great-great grandfathers are not immigrants to this country once upon a time ago. Fair, right?

No Tarawih for China Muslims

Local governments issued orders to stop Uighur Muslims from performing their rituals during Ramadan on claims of preventing violence. (Google)BEIJING — Muslims in China's far northwest region of Xinjiang are banned from performing Tarawih prayers, special nightly prayers performed during the holy fasting month of Ramadan, with men prevented from growing beards and women from covering their faces, in the latest restrictions on China's Muslim minority.

"We must timely warn and stop religious believers from organizing and planning large scale prayer groups and prevent any large crowd incidents that could harm social stability," said a notice on the Xinhe county website cited by Agence France-Presse (AFP) on Friday, September 5.

Orders were issued by local governments this week to stop Uighur Muslims from performing their rituals during the fasting month on claims of preventing violence.
The orders prohibit government officials, Communist Party members, teachers and students from observing the dawn-to-dusk fasting month.

"Any person caught forcing another to observe Ramadan would be punished," said a notice posted on Xinjiang's Zhaosu county website.
In some areas, Muslim men are banned from growing beards and women prevented from covering their faces with veils.

"For those that maintain beards and for the women who wear veils, we should take all effective measures to have them shave their beards and take off their veils," the Shaya government said, without elaborating on how this would be done.
The county government also stepped up patrols around mosques in the region.

"The handing out of religious propaganda in public places by any work unit or individual is banned," the Shaya government said.
"We must strictly prohibit the playing of any audio-visual tapes, loud speaker announcements and religious drum rituals that could disrupt the Ramadan festival."
Muslims worldwide began this week observing the holy fasting month of Ramadan, the ninth month of the Islamic lunar calendar.

During Ramadan, adult Muslims, save the sick and those traveling, abstain during daylight hours from food, drink, smoking and sex between dawn and sunset.
Muslims dedicate their time during the holy month to become closer to Allah through prayer, self-restraint and good deeds.

The draconian Chinese religious restrictions on Uighur Muslims drew flak amid warnings of fuelling tension in the Muslim-populated region.
"We have heard of these types of measures on beards and veils, that Uighur party members and citizens who join the government are expected to distance themselves from overt cultural and religious expressions," said Phelim Kyne, a Hong Kong-based researcher for Human Rights Watch.

"But by putting them in black and white on government websites, they are showing that they have become much more concerned with the situation and are deepening the crackdown."
Dilxat Raxit, spokesman for the World Uighur Congress, warned that the restrictions would only increase tensions among Xinjiang's Muslim population.

"To publicly restrict Uighurs from observing the Ramadan fast is a serious act trampling on the religious faithful," the German-based Raxit said in a statement.
"At the same time this is only going to intensify the conflict (in Xinjiang)."
Uighur Muslims, a Turkish-speaking minority of eight million in northwest Xinjiang region, have long chafed under Chinese control.

Xinjiang has been autonomous since 1955, but continues to be the subject of security crackdowns.
Beijing views the region as an invaluable asset because of its crucial strategic location near Central Asia and its large oil and gas reserves
Posted by PEMBELA